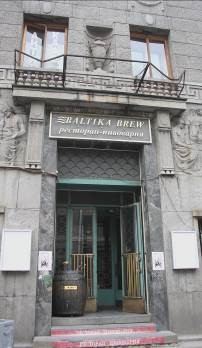 Please note that the name of this brew pub-restaurant is signed as Baltika Brew in Latin script so it is pointless to transliterate it into Cyrillic, as it would be unlikely to be seen it in that alphabet.

This is a strange pub in many ways. Firstly, the building itself; it is said it that it was built as a bank and that is certainly feasible. However it must have been the state bank as it is absolutely huge. From the outside it appears very austere being constructed in grey stone with some detailing in a severe art-deco style.

Inside the decor is also somewhat odd. There appear to be three main eating and drinking areas with the long bar in the middle part. Off this are several rooms, also with weird decor.

As can be seen the coloured lighting is not what you'd expect but at least this can be explained as, in the evenings there is live music and discos, so the ambience changes as cocktails become the main beverage.

As in most establishments in the big cities of Russia there was a bouncer on the door but he didn't bother me as I headed for a stool at the bar. Before I mention the beers on offer, can I explain that the place is owned by the Baltika brewery, the largest brewing company in Russia. The construction of their St Petersburg brewery commenced in 1978 and in true soviet manner, was not completed until 1990. The brand name was not established back then and the beers were the standard types that nearly every brewery in the land produced: Zhigulevskoye, Rizhskoye, Admiralteiskoye and Prazdnichnoye. 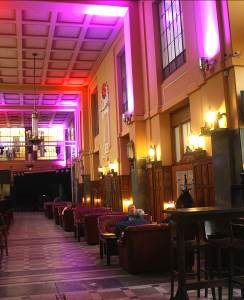 Privatisation occurred in 1992 and that's when the Baltika brand was introduced. In 1997 the wholesale expansion of the company began when they acquired the Don (Дон) brewery at Rostov-on-Don. They continued a program of acquisitions and were part of a merger and this continues to the present day. Their beers are produced at 12 breweries nationwide with the company having a 40% share of the country's beer production, and they have moved overseas as well.

In the early 2000s I remember seeing dedicated wagons in a blue livery bearing the company's name on freight trains crossing the country. I suppose that because they now have a network of production sites, these are not used as much.

The firm was, at some time, purchased by a consortium of Hartwall of Finland and Scottish & Newcastle from the UK. Hartwall was later purchased by the multi-national Carlsberg, based in Denmark, and they continued to own the company along with S&N for a little longer. Eventually the British company received an offer from Carlsberg that couldn't be refused. They were divesting themselves of their brewing operations at the time, so this suited their corporate philosophy, and shareholders earned a lot of money. So since 2008, Baltika has been under the 100% control of Carlsberg.

The beers of the parent company are on sale at Baltika Brew, but it is the home-brewed products that attract my attention. I reproduce the main parts of the beer menu below; it was in both Russian and English. The comments on each beer are as written on the menu. 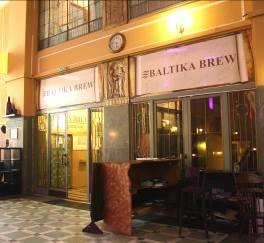 Looking at my notes I see that the only beer I tried was the Pale Lager, which I liked. I am surprised that I didn't try any of the others, but some seemed a bit odd. My only excuse, and it is poor, was that it was a hot and humid day and I suppose I wanted something refreshing that was not dark.

I am told that the food here is good and is produced in a variety of styles including, English, Russian and Indian! This pub is just a hundred metres from the Nevsky Prospekt, the major source of retail therapy in the city and literally around the corner is the Winter Palace that contains a major part of the Hermitage, the world's largest art gallery.

The pub is less than ten minutes away from the Metro station of Admiralteyskaya/Адмиралтейская. This is on line 5 (purple). Nevsky Prospekt with its multitude of trolleybuses is 100 metres from the pub.