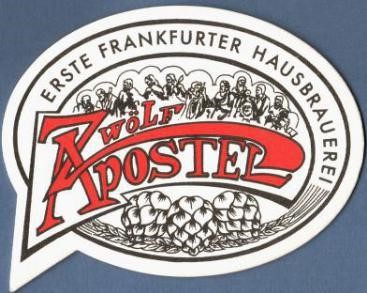 This likeable brew-pub brings a little bit of the country to central Frankfurt. It has been here since 1988 which makes it part of the first wave of new small German breweries. It is to be found on a street corner. The building has always been a pub and dates back to the 1880s. It is said that the brewing equipment once belonged to the Prince of Bavaria. Possibly true, but I have been unable to substantiate the facts. 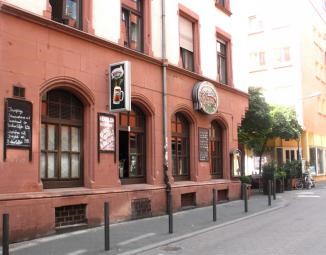 The entrance door is on the corner of Elefantengasse and Rosenbergerstrasse. After entering I could see that the pub’s floor plan was in an L shape and I was at the apex. I took a seat in the side that parallels Elefantengasse that was opposite the impressive service counter. This was a large structure made of wood with fitted refrigerators, a bar, and lots of storage space for glasses.

Almost in front of my seating place was a semi-circular alcove again fashioned in beautiful varnished wood, as was the furniture on this side of the room.

Large windows let in a considerable amount of light and cushioned fitted bench seats faced inwards from them. The same furniture theme continues on the other side of the pub level with Rosenbergerstrasse. 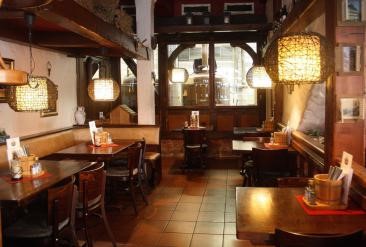 There are tiled floors throughout and the electric lighting from the ceiling was encased in yellow shades. At the rear of the room on the Rosenbergerstrasse the brewing equipment can be observed behind a glass window. Maybe to add a little credence to the Prince of Bavaria story I must that the brewing vessels did look quite old. Although I didn’t visit, there is another room in the basement. This is said to be very cosy with a good atmosphere. Rosenbergerstrasse is pedestrianised and there is an outside terrace there.

There just two beers offered, an unfiltered Helles (Light lager) and an unfiltered Dunkel (Dark lager). Over the years these beers seem to have changed considerably as the quoted strengths testify. Note that the brewery doesn’t quotes the abv on their menus or their website. 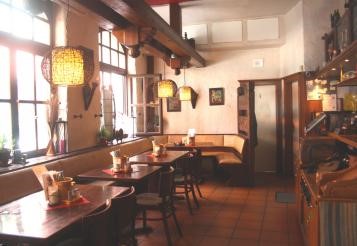 Outside sources say that the Helles is between 3.5% and 5.0% and the Dunkel varies from 3.8% to 5.7%! I thought the Dunkel was the best having a good strong flavour, the Helles was acceptable. In the past they have been known to brew a Pils and a Christmas beer but not now, seemingly.

The food is interesting and gets high acclaim. Originally the owner was from Croatia in Yugoslavia and the menu had a definite “Balkan Grill” appearance.

There many of these in Germany in the past but the numbers have declined somewhat these days. Now Yugoslavia is free and split back into its constituent parts I guess a lot of the immigrants to Germany have gone back home.

There are still some Balkan specialities, but steaks and schnitzels predominate, although there is cepeliniai, a Lithuanian potato dumpling filled with minced meat served with bacon and cream sauce. The pub is now owned by Milli Dulaj, and his wife Vilija, whom I assume are from Lithuania.

Frankfurt is mostly known for its Apfelwein, which is cider. Beer often takes second place, so this pub is only one of three brew-pubs in this very large city.

However, it is a great place to visit despite that it only serves two beers. So please make a bee-line to it should you be in central Frankfurt.

From the U- and S-Bahns make your way to the Konrad-Adenauer-Strasse exit and go up to the street.
It is a dual carriageway and the Konstabler-Wache stop of tram routes 12 and 18 is in the central strip.
Head in a northerly direction along this road, passing the Westin Grand Hotel on the left.
Continue and turn left into Vibeler Strasse, almost immediately go first right into Elefantengasse.
You will find the pub on the left hand side. Maximum walking time is ten minutes.