This was a spontaneous visit as I was travelling on the 833 bus from a visit to the Joh. Albrecht pub and had stood up to alight at the Barbarossaplatz stop to change on to the U-Bahn to return to the city centre. It stopped at lights and I glanced out of the window and saw the illuminated sign of this pub. I was interested as Schlüssel is one of the city's small traditional breweries and I've never had their beer anywhere else other than the pub and restaurant where it's brewed. 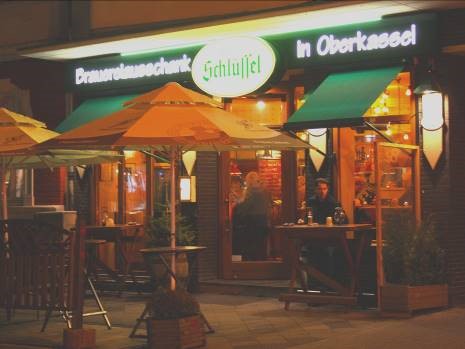 So, instead of transferring to the U-Bahn, I went back around to corner to investigate. Ausschank means an outlet where a certain product is sold, off sales if you like. Yet, Brauereiausschank implies an official outlet, often at the brewery itself, sometimes the only one.

I have subsequently found out that Brauerei Schlüssel has three of these, other than the head office. They are possibly quite recent; I've not come across them before.

One thing that is not new is the pub's premises, as I am sure it has had a long life performing its function as a bar. Outside, there's a small terrace with wooden furniture under parasols. Inside it is a typical kniepe, which is a small local bar in a town or city. Dusseldorf is particularly well blessed in this respect. The lady of the house was seated inside the door and she had seen me take some photographs outside and, in a friendly way, asked me why. When I told her the pub might be featured on a web-site of the best, she seemed very pleased.

My reply could have been a bit premature, but when I looked around I could see a very large cask on the bar counter, and my mind was made up. In reality, the only place I could find a seat was at the bar on a stool next to said barrel that served Schlösser-Alt (5.0%).

Observing the pub I could see it was most positively a local's pub and got the impression that I was probably the only person the landlady didn't know.

I noticed there were some old boys playing cards at one table. When I researched this article following my visit, I read that they host a cards tournament twice a year. The other thing I found out was that they hold a cycle rally each summer, now that is a first. Sky Sports is on for Bundesliga matches and there is a menu.

Although there were some full meals, most of the offerings were of the sausage/cheese/bread/potato salad variety that included most of the Rheineland favourites.

If you are on a tight tour (time wise) of the Altstadt, then it is probably not worth making the trip out to here. However, should you have a day in the city then it is well worth the ten minute trip on the U-Bahn, especially as the Alter Bahnhof and Joh. Albrecht brew pubs are very close by, and this one makes up an excellent trinity of watering holes in the Oberkassel and Niederkassel districts. But please check the opening hours below.

The U-Bahn stop is Barbarossaplatz and it is served by routes U70, U74, U75, U76 and U77.
From the stop walk back towards the city, turn left into Oberkasseler Strasse and the pub is on the right.

The Barbarossaplatz bus stop for the 833 is closer. Follow the same directions; less than 5 minutes from both.