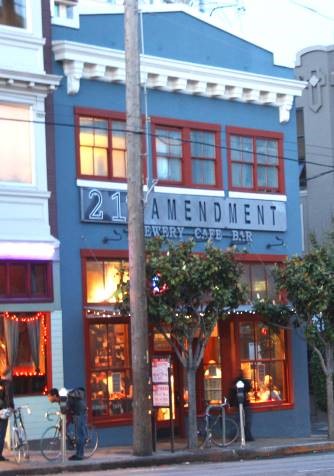 This brew pub is in the South Park district of San Francisco. It is just south of the Financial district and not that far from Market Street. As well, it is just two blocks north of the Giants Baseball stadium. If you intend to visit it might be prudent to study their fixtures should you desire a quiet encounter with the pub. On the evening of my visit I had intended to go to the Thirsty Bear brew pub, not far away, but it was closed because it being Memorial Day. I managed to get there the following day.

Although it has quite a small frontage, the main room is quite large with a central bar. It was extremely busy that night with a number of sailors in uniform enjoying a beer. On the flight home the following evening I started to develop a viral infection that kept with me for over two months and I think this is where I caught it; it was hot in the pub. Yet, despite my bad luck, I thought it was a great place with some very interesting beers.

With the aid of a sampler set I went through the card and this even included the guest cider. Theses are my notes on the beers consumed that night:

South Park Blonde (5.5%). This is made with Czech hops and is a very light golden beer with little taste.
Hell or High Watermelon (4.9%). A wheat beer with watermelon added. Not as bad as it sounds with the Watermelon taking the sweet edge off the wheat.

5 South (5.6%). It's made with Cascade and Centennial hops and dry-hopped with Centennial. I thought it was really good, a classic American Pale Ale.
Amber Waves (5.6%). This uses citrusy hops and five different caramel malts. I found it to have the right taste for the style and it was not particularly bitter, as expected. It had a very dry taste, like vanilla.
Brew Free or Die IPA (7.0%). This is made with six different hops and I think it was much smoother than the Homefront IPA, see below. I could taste some US hops in the mix but there was no suggestion of citrus.

Black in Black (6.8%). Same hops as the IPA above with the addition of Black malt and it is this taste that dominates with a good bitter finish.
Homefront IPA (6.0%), Chinook and Cascade hops are the mainstay of this beer and it is very much in the West Coast style and slipped down rather too easily.

The cider was Two Rivers (Sacramento, CA) Sierra Lady Cider (6.5%) and I thought it was very good, being dry, but what a pity about the carbonation.

There are some simply excellent beers brewed here and the pub comes thoroughly recommended.

The pub is passed by the 10 bus and is two blocks north of the Second and King station on the Muni Metro and is served by lines N and T. It is less than fifteen minutes from the San Francisco Caltrains terminal that that serves many places down the peninsular to San Jose. Also, it's around fifteen minutes walk from Market and Mission Streets.