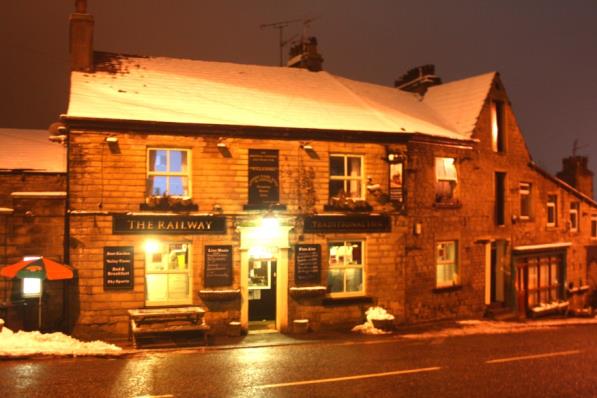 It was a freezing cold evening when we alighted from a packed evening train on the snowy platform of Greenfield station. However, it was only a short, yet slippery, walk down to The Railway Inn, whose welcoming lights beckoned us thirsty travellers. I was with fellow imbibers Linda, Mike and Stewart. Inside we took to the room on the right. There were two other drinking areas, one with a pool table. The walls are lined with old photographs of the Saddleworth area.

I'm not exactly sure when the pub started trading but the railway from Stockport to Huddersfield was opened in 1849 along with Greenfield station. The pub would have opened then or shortly afterwards. It was once a Wilson's House as witnessed by the outside sign. Nowadays it is a free house with a good selection of beers and ciders. Back then it was in Yorkshire and came under the administration of Holmfirth. That was a real problem as Holmfirth was on the other side of the Pennines and the crossing was often blocked by snow. As it just four miles from Oldham, it made sense to incorporate it in to the new county of Greater Manchester.

Available for our delectation that evening were the following tinctures: Theakston's (Masham, Yorks) Lightfoot (4.1%) and Old Peculier (5.6%); Charles Wells (Bedford) Bombardier (4.1%); Copper Dragon (Skipton) Golden Pippin (3.9%); Moorhouse's (Burnley, Lancs) Blond Witch (4.5%); and finally local boy Millstone Tiger Rut (4.0%) from Mossley. Mossley has a railway station and it is the only stop between Stalybridge and Greenfield. There were also some ciders but, regretfully, I failed to note them. 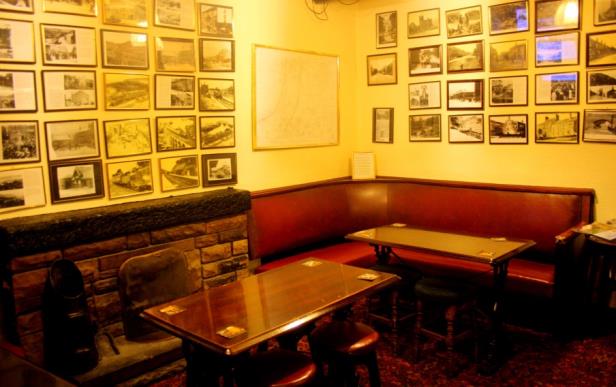 There is no food except for Pork Pies with mustard. It is a music pub with live bands on some nights and an open mic night. There is also a Juke Box. Not savoured that evening, there is a renowned beer garden with good views of Greenfield village in the valley below.

The pub does accommodation, so here is a link with the past as it also did back when it opened 150 years ago.

The Railway is a very enjoyable pub with good beer.

The train service is provided by Northern Rail and it runs hourly between Manchester Victoria to Huddersfield via Stalybridge. It is more frequent in the peak periods. Buses 180 and 184 connect Greenfield to Manchester running via Oldham. They are operated by First Bus Manchester.